What XC Skiing Has Taught Me

Last year I took up XC skiing.  It was on my list of things to do that year long before I met my current boyfriend.  Not entirely coincidentally XC skiing was high on his list of hobbies. One of the reasons I messaged him on the online dating site was because he already had a couple of the hobbies I was trying to develop – hiking and XC skiing.  I’m not sure how involved in XC skiing I would have gotten if it weren’t for him.  Being out in the middle of the woods with a map by myself is not so appealing.  I would have tried it but probably not have gone every weekend like I did last year and this year.  And my version of XC skiing would probably amount to an hour or two at a time on some flat trail.  We go for 4-5 hours on strenuous trips that leave us both exhausted but happy.

I’m surprised at what I can do physically and mentally.  I can push myself harder and further than I ever thought possible.  It seems I can follow him on skis long after I would have given up if I were on my own.  The pushing comes from within me not from him.  He’s considerate.  If I’m lagging behind, he waits without complaint.  My legs and arms might be on fire but I keep going because I want to.  I keep going just to prove to myself that I can.

When we come to some hills that I look at and think this looks more like downhill skiing I try to shake off the feeling of fear and panic and push ahead. If I manage to shake the panic and do it anyway, I succeed.  I think ‘TG thinks I can do this so must be I can.’  I trust him implicitly.  If I were with my ex and he had wanted me to go down these hills or push on I would have been suspicious and refused, ‘You’re trying to kill me!’   I’ve never been so successful at something physical.  Maybe because I never had anyone to believe in me.

Yesterday we had been skiing for 3 hours in the bitter cold.  The only thing keeping us warm was our steady pace and the intermediate trails we were on.  We arrived at the top of a hill that we couldn’t see the end of, it turned at the bottom – what we thought was the bottom.  At the top of a hill was a bell with instructions to ring it twice before descending.  TG says “I don’t like the looks of this.”  In a moment of confidence I said I’ll go first.  I rang the bell, swallowed my panic and pushed off before I could think about it.  I flew down that hill looking only 6 feet in front of me.  That seems to be the trick, Don’t look too far in the distance.  I leaned around that bend at the ‘bottom’ and kept flying, down another steep hill, trees lining my path.  Again I turn, another hill and I’m heading toward the trees but I think “I can make it!” and I lean right.  Magically my skis point right and I miss the tree line by two feet and I’m back on the trail.  I keep going.  I make it all the way to the bottom ON MY FEET.  I felt like screaming in delight.  But I keep quiet because I know TG is heading down behind me and I don’t want to break his concentration. 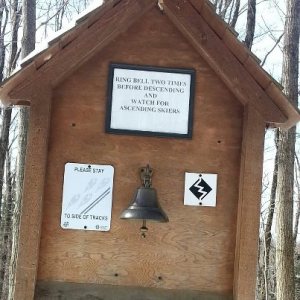 What a wonderful feeling.  I don’t think I would have ever accomplished this out there on my own.  I told TG he makes me brave.  In his self-deprecating manner he says ‘Because you see how clumsy I am and you figure you can do it too.’  I say “No because I trust you and I believe you wouldn’t do something unless you thought I could do it too.”

This entry was posted in Uncategorized. Bookmark the permalink.